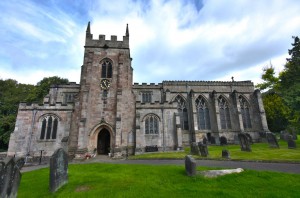 Welcome to St Mary & St Barlok, Norbury.   The church was built by the Fitzherbert family in 1295, with 14th and 15th century additions.  The church displays a splendid wealth of medieval artwork and architecture, the crowning glory being its eight rare grisaille stained glass windows in the chancel, dating 1306.  The windows have recently undergone a £500,000 cleaning by Holywell glass of Wells- the project was funded by English Heritage, because the windows are some of the best examples of grisaille glass in the country.

The author George Eliot (ne Marion Evans) lived in Roston for a short while, and her father Robert Evans is buried along with his wife, father and mother in the churchyard.

The manor next door dates from 1290 with Tudor additions.  The manor is open two and half days a week with the National Trust.  Most visitors to the church like to visit the manor as well.

Please note that the church has ramps both inside and out to assist wheelchair users.

Like many places in Derbyshire, Norbury was mentioned in the Domesday Book, in 1086, together with Roston, amongst the many manors given to Henry de Ferrers by William the Conqueror. The village was spelt Nordberie or Nortberie. At that time the village had a church and a mill.

Norbury Manor was given to Henry de Ferrers in 1081, the previous Saxon owner Sweyn having been dispossessed and imprisoned for his part in the uprising of Hereward the Wake. Henry founded a priory at Tutbury and gave Norbury to them. In 1125 the prior of Tutbury gave Norbury in fee-farm to William Fitzherbert on a yearly rental of 100 shillings. In 1442 Nicholas Fitzherbert and his son and heir Ralph gave all their lands at Osmaston and other lands at Foston and Church Broughton in exchange for Norbury. The Fitzherberts held it until 1872.

Stained glass in chancel east window (15th century, detail in church of St Mary and St Barlok
Sactus Burlok Abbas The present church is the third one on this site, the first being Anglo-Saxon and the second a Late Norman church. This second church was built c. 1179 by John Fitzherbert, 3rd Lord of Norbury and dedicated to St Barlacus. The saint appears in the centre light of the south window; he is portrayed holding a pastoral staff in his left hand and a book in his right. Underneath there are the words Sactus Burlok Abbas. The name also appears as Saint Barlok in a 1491 charter. Saint Barlock has been identified with Saint Finbarr, an Irish abbot and bishop of the 7th century and the patron saint of Cork. The dedication may arise from John Fitzherbert having been Governor of Waterford for 3 years c. 1174. Born in the second half of the 6th century, Finnbar was baptised Lochan, but was later called Fionn Barr or the Fair-Headed One. His life was recorded in the manuscript Lives of Finn Barr. The parish church of Fowey in Cornwall is dedicated to him, as St Fimbarrus. This Cornish church was built c. 1170 by William Fitzturold, the name of the patron saint being given as Barrianus.

The present church of St Mary and St Barlock was built piecemeal over a period of about 200 years. The chancel is the earliest part of the church, and is unusually large in relation to the rest of the fabric. It is 46 feet (14 m) long, and is both wider and higher than the nave (which at 49 feet (15 m) is slightly longer). The design of the chancel windows’ tracery indicates a building date of c. 1300-1310, as does the contemporary armorial glass. Two of the arms depicted are those of Otton de Grandson who left England in 1307, and Robert the Bruce, at war with England from 1306. The roof of the chancel is a later 15th century wooden construction; external buttresses and internal shafts running up to the roof line indicate that the original design may have intended a fan vault, never built.

The south tower, nave and chapel east of the tower were built by Nicholas Fitzherbert (d. 1473), he or his son Ralph (d. 1483) built the north aisle, and his grandson John Fitzherbert (d. 1513) built the south-west chapel, which was finished in 1517. Much of the stained glass added by the Fitzherberts survives; these are for the most part figures painted in grisaille. In the south-east chapel there is a window showing the donor and his family. 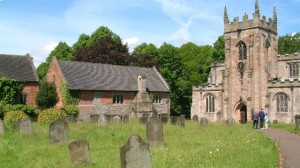 Norbury Manor is a 15th-century Elizabethan manor house and the adjoining 13th-century stone-built medieval Norbury Hall, known as The Old Manor in Norbury near Ashbourne, Derbyshire. It is a Grade I listed building.

The manor was owned by the Fitzherbert family from the 12th century and the manor house built by William Fitzherbert in the mid-14th century is remarkably well preserved. The Old Manor is noted for its architectural features including a rare king post, medieval fireplace, a Tudor door and some 17th-century Flemish glass.

The adjoining Tudor house was built by Ralph Fitzherbert in the mid-15th century and rebuilt in about 1680, but retains many of the original features.

The accompanying gardens include a parterre herb garden.

The Hall was badly damaged by Parliamentary forces during the English Civil War and after the death of Sir John Fitzherbert in 1649 was in a ruinous state and fell into disuse.

On the death of John Fitzherbert in 1649 the estate passed to his cousin William Fitzherbert of Swynnerton Hall, Staffordshire who rebuilt the Tudor portion of the property in about 1680.

The Fitzherberts sold the estate in 1881. The Hall has been owned by the National Trust since 1987 and is currently used as holiday accommodation,  having previously been let to tenants. The Old Manor, however, is open to the public on Friday mornings and Saturday afternoons during the summer.

Junior branches of the Fitzherbert family had seats at Tissington Hall and Somersal Herbert Hall.